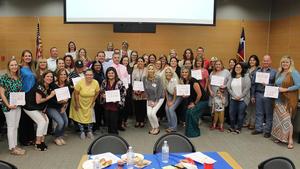 The Comal ISD Council of PTAs honored campuses for membership increases during its last Council luncheon for the school year.

The Comal ISD Council of PTAs wrapped up the year with its final Council luncheon at the District office April 23. Highlights from the meeting and luncheon include a record number of membership awards and the election of the Council’s 2019-2020 officers.

Additionally, two campuses earned Texas PTA’s most prestigious membership award for local PTAs, the platinum One Voice for Every Child Award, which means they recruited the same number of members as students enrolled on the campus. Both Rahe Bulverde Elementary and Indian Springs Elementary earned this coveted award.

This is Indian Springs’ third year in a row to attain this award, and Rahe Bulverde’s second year.

In addition, the Council recapped the year’s highlights including Rally Day, Reflections Ceremony, Parent Summits and Health & Activities Fair while looking forward to next year with the addition of a Clothes Closet.

Congratulations to all the campus PTA members and thank you for all you do on our campuses.

-Pictured are principals and PTA representatives from campuses which received PTA membership awards this year.