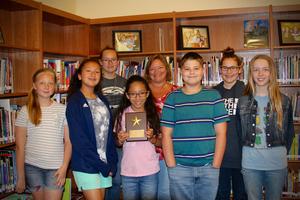 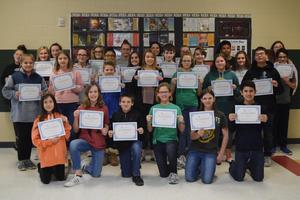 Even in today's Snapchat, Twitter and Instagram craze, the allure of reading a book and writing a poem still grab the attention of many. Just check out the accomplishments of these Mountain Valley Middle School readers and writers.

“We had so many students chosen for publication at Mountain Valley Middle School that we received the Poetic Achievement Award,” said Kidd. “I am so proud of these 32 students for entering their poems and representing MVMS so well. This was a nationwide poetry contest, and our students did this on their own outside of class.”

In addition, with the breakdown of sixth and seventh-grade winners, the campus also received two additional free books for the library.

The excitement on campus doesn’t end there, however. The Mountain Valley Book Geeks team became the 2019 winner of the Travis T. Lamb Memorial Name that Book Lone Star book challenge, a district-wide contest sponsored by the Comal ISD libraries with all seven middle schools participating.

For the Name that Book contest, each middle school is represented by a team of six students which competes with other teams in four rounds of 20 questions each. The team with the most correct responses after the fourth round is the winner.

Participating students read the 20 books from the Texas Library Association’s Lone Star reading list. Normally, these books have between 250 to 500 pages each.

“It is a very fun way to promote reading closely for details,” says Kidd. “Students practice for weeks and enjoy having lunch with foods from the various books.”